© Reviving the Islamic Spirit
October 11, 2019 by ris in Convention Speaker 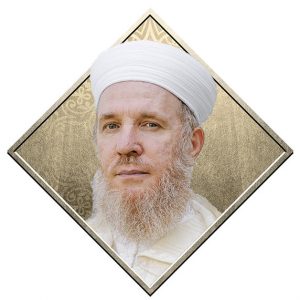 Born in Damascus on the 13th of Dhul Hijja, 1382 AH (1963 CE), Shaykh Sayyid Muhammad Abul Huda al-Yaqoubi is from a noble family of scholars that descend from the Prophet Muhammad (may Allah’s peace and blessings be upon him). From this household have emerged numerous renowned men of Allah who have taught the sacred sciences for many centuries. Shaykh Muhammad’s father, the light of Damascus and master of the Islamic disciplines, Sayyid Ibrahim al-Yaqoubi, was one of the greatest scholars of The Levant in recent times.

Shaykh Muhammad’s grandfather was a great scholar and Gnostic, Sayyid Ismail al-Yaqoubi; his father’s maternal uncle was Shaykh Arabi al-Yaqoubi and his paternal uncle was the famous Gnostic, Shaykh Sharif al-Yaqoubi. Amongst his blessed ancestors, three have held the Maliki Imamate at the Grand Umayyad Mosque in Damascus – may Allah envelope them all in His mercy.

From an early age, Sayyid Ibrahim al-Yaqoubi supervised Shaykh Muhammad’s upbringing and tutelage. He accompanied his father until his demise in 1406 AH. Shaykh Ibrahim meticulously ensured that every aspect of his son’s life was developed with the most detailed care under the guidance of the Shari’a. For over twenty years, Shaykh Muhammad studied over 500 works with his father, in the sciences of Qur’an, Hadith (Prophetic traditions), Fiqh (Jurisprudence), Mantiq (Logic) and many more. His father gave him full authority to narrate Hadith, to teach and to issue fatawa (legal rulings). He also received many other ijazat (licenses to teach) from the most prominent scholars of Syria such as: the Hanaﬁ Mufti of Syria, Shaykh Muhammad Abul Yusr Abidin; the Maliki Mufti of Syria, Sayyid Makki al-Kittani; Shaykh Ali al-Boudaylimi of Tlemcen; Shaykh Salih al-Khatib; and Shaykh Abdul Aziz Uyun al-Sud.

Some of the books Shaykh Muhammad studied under his father are as follows: most of the six books of Hadith, al-Muwatta of Yahya al-Laythi, most of al-Muwatta of Imam Muhammad with Sharh al-Laknawi, most of al-Muwafaqat of al-Shatibi, the ﬁrst volume and other sections (of the ﬁve volumes) of al-Hashiya of Ibn Abidin, Ihya Ulum al-Din, al-Hidaya of al-Marghinani, Mughni al-Labib of Ibn Hisham, parts of Kitab Sibawayhi, Miyar al-Ilm of al-Ghazali, several volumes of Sharh Sahih Muslim of al-Nawawi, several volumes of Irshad al-Sari of al-Qastallani, half of Madarik al-Tawil of al-Nasaﬁ, Hashiyat al-Sawi on Tafsir al-Jalalayn, three volumes of Mu’jam Maqayis al-Lugha of Ibn Faris, al-Bayan w’al-Tabyin of al-Jahiz, several volumes of Wafayat al-Ayan of Ibn Khallikan, and Tabaqat al-Shaﬁ’iyya al-Kubra of Ibn al-Subki, and Maqamat al-Hariri. In fact, Shaykh Muhammad wrote a thabat (detailed list) of the names of the books he studied under his father entitled, “The Concealed Pearls”. This book is a testament to his father’s labour of love and the expenditure of his energy in passing on his knowledge and experience to his children, a rarity in our times.

In the summer of 1973 at the age of 11, Shaykh Muhammad started teaching a regular Qur’an and Tajwid class composed of a group of boys at the Darwishiyya Mosque in Damascus. He began giving public speeches in Ramadan after Asr prayer in the same mosque at the age of 12. At the age of 14, he made his debut as Friday speaker in the mosque known as al-Saadaat, where Sayyiduna Mu’adh ibn Jabal is buried. At the age of 17, he was appointed Friday Imam and speaker and as a teacher of the Sacred Knowledge at the age of 20. Since then, he has been teaching the Islamic sciences to students of all levels from all parts of the world. Shaykh Muhammad memorized Jawharat al-Tawhid when he was 5 years old, al-Arba’in al-Nawawiyya when he was 6, and later on, dozens of famous didactic odes and poems along with most of al-Qur’an al-Karim. He also memorized considerable parts of al-Mufaddaliyyaat and al-Hamasah of Abi Tammam. The ﬁrst poem he wrote was at the age of 13, and it was a plea to the Prophet. His collection of poetry is growing, and a few poems in English have been added to it. Throughout the years of his study, Shaykh Muhammad went through extensive spiritual training in the path of Tasawwuf under his father, who was a great saint and spiritual guide known for his righteousness and asceticism. Shaykh Muhammad studied the major works of Tasawwuf under him. As well as accompanying him, he was his servant, his student and the bearer of his shoes, which he considers the key to the opening he received. The company of his father exposed him to a wealth of light, wisdom and knowledge, an experience that was far beyond what one may attain from books or from occasional meetings with teachers.

He is an authority in the science of Hadith; his asanid (chains of transmission) are of the highest amongst scholars of our time. Students and scholars visit him in Syria or when he travels, to hear the masalsalat and take ijaza in narration of Hadith. In his efforts to revive the tradition of Hadith recitals, he has taught al-Muwatta of Imam Malik, Sahih al-Bukhari, Sahih al-Muslim, Sunan Abi Dawud, Jami’ al-Tirmidhi and he intends to ﬁnish all the main six books of Hadith in the coming terms insha’Allah.

He has travelled extensively and participated in conferences, delivered lectures and taught intensive programmes. Additionally, he has delivered Friday speeches in Lebanon, Egypt, Jordan, Kuwait, Saudi Arabia, Algeria, Pakistan, Denmark, Finland, Sweden, Norway, Switzerland, Germany, France, Spain, Canada, the United States, Indonesia, Singapore, South Africa, Morocco and the UK. Over a thousand people have embraced Islam at his hands and many have repented after listening to him. He is a scion of the prophetic household, a torch bearer in this time and a charismatic public speaker in both Arabic and English.

Sayyid Muhammad al-Yaqoubi’s incredible training at the hands of several luminaries of this ummah, most notably his father, have propelled him to rank among the leading scholars of Islam in the world today. He currently resides in Damascus and is a public teacher at some of the most prestigious institutions there. He teaches Aqida (theology) at the Grand Umayyad Mosque; he holds the position of Jumu’a Khatib (Friday speaker) at the Jami’ al-Hasan Mosque; at the Mosque of Shaykh Muhyiddin Ibn Arabi, he teaches from al-Risalah of Imam al-Qushayri and al-Shama’il al-Muhammadiyyah of Imam al-Tirmidhi.