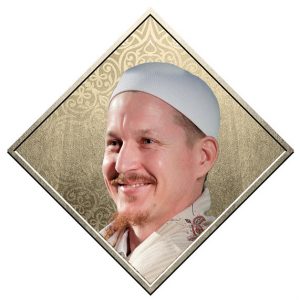 Shaykh Yahya Rhodus was born in Kansas City, Missouri. At the age of 19, he embraced Islam in Santa Clara, California. He began his study of Islam with Shaykh Hamza Yusuf and visiting Mauritanian scholars such as Shaykh Khatri wuld Baybba and Shaykh Abdullah wuld Ahmadna. In 1998, Ustadh Yahya traveled to Mauritania to pursue a full-time course of study, where he learned from some of Mauritania’s greatest scholars, including the distinguished, Murabit al-Hajj. He also spent an interim period in Damascus, Syria where he received formal education in the Arabic language, grammar, and Qur’anic recitation.

In 2000, Ustadh Yahya moved to Tarim, Yemen to continue his studies at the prestigious learning institute, Dar al-Mustafa. There, he spent his formative years studying with the renowned scholars, Habib ‘Umar bin Hafiz and Habib ‘Ali al-Jifri, along with other local scholars. He studied various sciences including Tafsir, Hadith, theology, jurisprudence, legal theory, the Prophetic biography, and Arabic poetry.